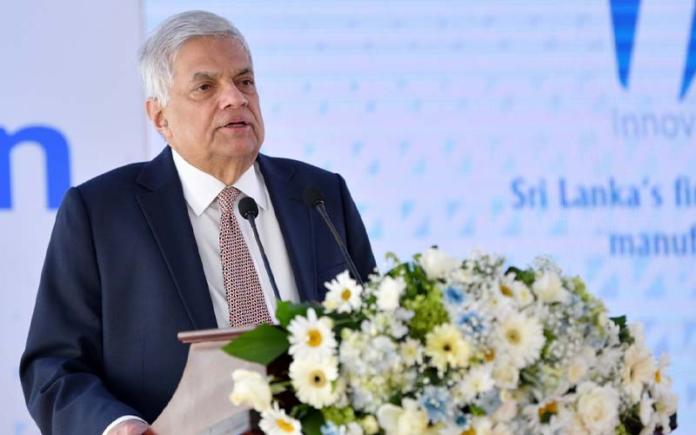 President Ranil Wickremesinghe has said that a bill on gender equality and women’s empowerment will be submitted to Parliament soon and he has instructed the women’s parliamentarians’ forum to prepare the bill.

The President emphasized that women’s representation should be increased not only in the Parliament but also in other sectors and the public sector as well as the private sector should focus their attention in this regard.

The President pointed out that the representation of women in the First Council of Sri Lanka was 2% and 91 years after universal suffrage, the representation of women in the current parliament is only 5.3%. President Ranil Wickremesinghe made these observations by joining the Committee Stage Debate on the budget proposal for the financial year 2023 in parliament today (01).

Following is the President’s speech in parliament today:

“I expect to speak especially on the Ministry under me. We thank the Women Parliamentarians’ Caucus for commencing a 16-day campaign against Gender-Based Violence (GBV).

It was in 1931 that Sri Lankans got the universal franchise. However, the State Council did not have any female representation. The group of females including former President Chandrika Kumaratunga’s grandmother requested the Donoughmore Commission to permit the females to contest at the election as well. At the election, not a single female won a seat. Eight months later after the demise of my great grandfather J H Meedeniya, Mrs Mollamure was appointed. On the other hand, Mrs Florence Senanayake was appointed from the opposition side. Hence, the female representation in 1931 was 2 percent and after 91 years after the universal franchise was achieved, we have increased the female representation up to 5.3 percent which is not satisfactory.

However, the UK parliament did not have 2 percent female representation in 1931 but Canada, Lok Sabha, Australia etc. have increased it by now. We all are responsible for not doing so.

In 2015 we proposed to increase the female representation at the Provincial Councils but could do it due to the amendment. However, the proportion of females in our society is 52 percent. That’s why I asked the Women Parliamentarians Caucus to attend to that matter.

We are drafting two acts related to Gender Equality and Women Empowerment. It is also proposed to establish an independent commission under the name of the National Women’s Commission to give leadership and make recommendations to the Parliament to intervene in matters relating to gender equality and women empowerment. The government supports it and I hope the Opposition side too would support it. We also have planned to appoint a female Ombudsman.

We have much to talk about on this matter. When we look at the estate sector, and garment factories, most of the employees are females but there is not a single woman director in them. Not only the Private sector but the government sector too has done the same mistake, as the scenario in the corporations is the same. We can address it by way of law.

However, where the education sector, health and administrative sector are concerned, female representation is higher. But in the private sector, we don’t find this development and it should be improved. But when we look at the numbers receiving education, more than 50 percent are female which is not reflected at the higher level of employment.

In addition, the Women Parliamentarians’ Caucus has been assigned to attend to Child affairs as well. The number of orphan children being looked after by the government is very low. The Caucus has to look into the protection of those children as well. We have to attend to the matter of elders and disabled persons. The amount that we can allocate for them has dropped as we settle loans, paid salaries or maintained loss-making institutions. But the curtain and what is in front of the curtain are nice. But nobody is looking behind a different curtain. Earlier this ministry was not considered to be important under any government but now we are considering granting other ministries to female members. In India Finance Ministry, and Defense Ministry were held by females. Liz Truss was also the Foreign Minister. So we should attend to these matters and hence I instructed the Women Parliamentarians’ Caucus to propose to formulate the required laws. We have a responsibility to increase women’s representation not only in parliament and politics but in all other areas as well.

I also instructed the Minister to address the issues related to Samurdhi. The issue there is some needy people are not receiving Samurdhi benefits while some who are not needy are getting them. We have to remove those who are not eligible. Some decisions may not be popular but the Parliament should be strong to get the correct decision. Though I don’t talk much about education as the minister will address it. Do we need the same schools we had when free education was introduced in 1946 or the same schools we had in 1980? I think we need schools that look ahead to 25 years beyond 2023.

The entire system that we are used to will change. MP Eran Wickramaratne will tell you all that we may not have brick-and-mortar universities at the end of the day. It could be something else. However, why can’t we be the regional hub for that?

Sri Lanka can be a regional hub for education. Let us make up our minds. You are allowing billions of dollars to go out, at least three billion. So not only can we retain that 3 billion, but if we do it right, we will be able to attract another 10 billion. We must do that.

Can we be saying these are students and taking in those who are 40-50 years and expect to rectify this system? That’s all I am saying. Some may attack me for it, but I don’t mind. That is a fact. I said it earlier as well, earlier, we entered universities and passed out by the age of 21 or 22. Yet today, how many pass out by that age?

Young men and women must pass out and leave university by the age 21-22. Then they can have jobs. Now we have to tailor the courses to suit the job market. In the future, we may experience a shortage of job opportunities in the job market, especially in the arts and social science fields. Hence, I would like the national council and the other committees of parliament to focus their attention on this issue. This issue could only be resolved if the matter is presented to these committees. The only issue that remains is whether the government is going to do it alone or whether the Opposition will join with the government and support its program or whether they will get onto the streets and start protesting. So we have to decide which course of action we are going to take. Developing the education sector is a step taken for the betterment of the future generations.”