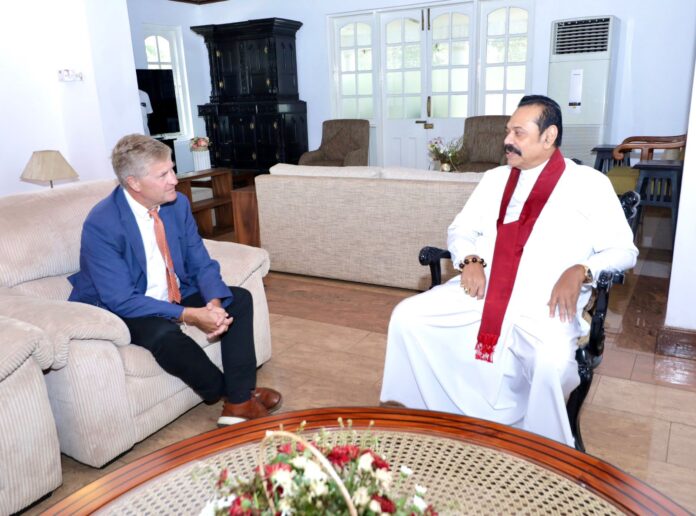 Former President Mahinda Rajapaksa congratulated Mr. Solheim for being appointed as an International Climate Adviser to President Ranil Wickremesinghe and wished him all support in this new role.

Mahinda Rajapaksa in his discussions with Mr. Solheim remembered the contribution made by Mr. Solheim to Sri Lanka as the peace negotiator between the Sri Lankan government and the LTTE Terrorists during Sri Lanka’s civil conflict and discussed the negative impacts the conflict had on the Sri Lankan economy.

Mahinda Rajapaksa and Mr. Solheim also discussed the present economic crisis facing Sri Lanka and he invited Norwegian investors to invest in the island, especially in assisting to strengthen the blue economy. Rajapaksa said that Norway could play a vital role in marine projects and said that the government would provide all necessary assistance for such vital projects to be implemented.
Mr. Solheim assured Rajapaksa of Norway’s support to Sri Lanka and discussed ways on how both countries could further work together moving forward. Higher Education Minister Suren Rahgavan was also present at the meeting.

Celebrating the International Day for the Conservation of the Mangrove Ecosystem

Shortcomings existing in Maha Season should not occur in the future...