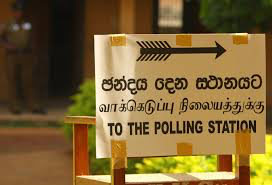 The election monitoring NGOs in Sri Lanka expressed their concern and disagreement on the summoning of the Elections Commission (EC) by President Ranil Wickremesinghe yesterday (Jan09).

The prominent NGO that monitors elections in Sri Lanka, the ‘Peoples Action for Free and Fair Elections’ (PAFFREL) voiced concern about the reported meeting of members of the EC with President Ranil Wickremesinghe on Thursday and added it was unethical, unnecessary and unwarranted.

The Executive Director of the PAFFREL, Rohana Hetttiarachchi told that no one expects the executive to meet EC members at a time when the EC is involved in holding an election.

“This should not have happened. I don’t understand as to why the executive must meet the EC members when they are busy with an election. The executive must not advice or he does not have the authority to consult or instruct the EC on its official duties as it is an independent body. The meeting gives a wrong signal to the effect that whether the executive was attempting to influence the EC on issues pertaining to the conduct of the LG polls. The meeting also undermines the independence of the EC,” Mr. Hettiarachci stressed.

Meanwhile, a collective of six election monitoring NGOs also expressed their concern and indignation yesterday over the covert attempts by the SLPP led government to postpone the LG election by sabotaging the EC.

They said the summoning of the EC members by the President was a clear attempt to influence the EC to differ the polls.

“The money is there. The EC has announced the nomination day and time frame to hold the polls. Not only the entire country but even the global community is keen on holding a free and fair LG election in Sri Lanka. In such a situation, the summoning of the EC by the President is extremely wrong, immoral and sets a bad precedence. There is no split at all among the members of the EC as well suggested by interested groups,” they emphasized.

Commenting further on election monitoring, Mr. Hettiarachchi said the PAFFREL will start deploying about 400 local observers from 15th (Sunday) to monitor the election at district level well in advance to the start of accepting nominations.

The NGO will deploy about 10,000 local and foreign observers to monitor the entire duration of the polls island wide. The PAFFREL is in touch with the Asian Network for Free Elections (ANFEL) based in Bangkok, Thailand to obtain the services of a team of foreign observers and has held several rounds of talks successfully in this regard,” Mr. Hettiarachchi noted.

India to provide another US$ 2 billion financial assistance to Sri...

6 political parties currently not representing the Parliament present their views...