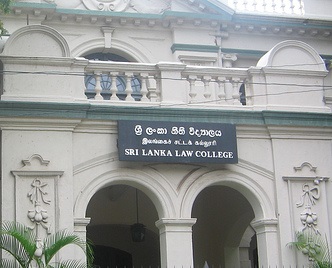 The fees for the general entrance examination, registrations, examinations and practical training, and other fees charged by the Law College have been increased.

This was announced in a special gazette notification, dated January 05, issued by the Incorporated Council of Legal Education.

Accordingly, the general entrance examination fee for the Law College was increased from Rs. 6,000 to Rs. 15,000.

Meanwhile, registration fees charged from the preliminary year students (direct entry students from the general entrance examination and those with foreign LLB degrees), the intermediate year students and the final year students have also been hiked.

As per the gazette notification, preliminary year students, who directly enter from the general entrance examination, now have to pay Rs. 25,000 as admission fee, and Rs. 25,000 lecture fee, and a total of Rs. 67,500 for the first academic year.

Preliminary-year students who enter the Law College with a foreign LLB degree are charged Rs. 117,500 in total for the first academic year including an admission of Rs. 75,000.

At the same time, the intermediate- and final-year students will have to pay a total of Rs. 40,500 and Rs. 50,500, respectively for the particular academic years.

Meanwhile, an admission fee of Rs. 25,000 is levied from final year students with LLB degrees from any university established or deemed to be established under the Universities Act, No. 16 of 1978 or General Sir John Kotelawala Defence University.

The communiqué mentioned that the revised practical training fee now will be Rs. 25,000.