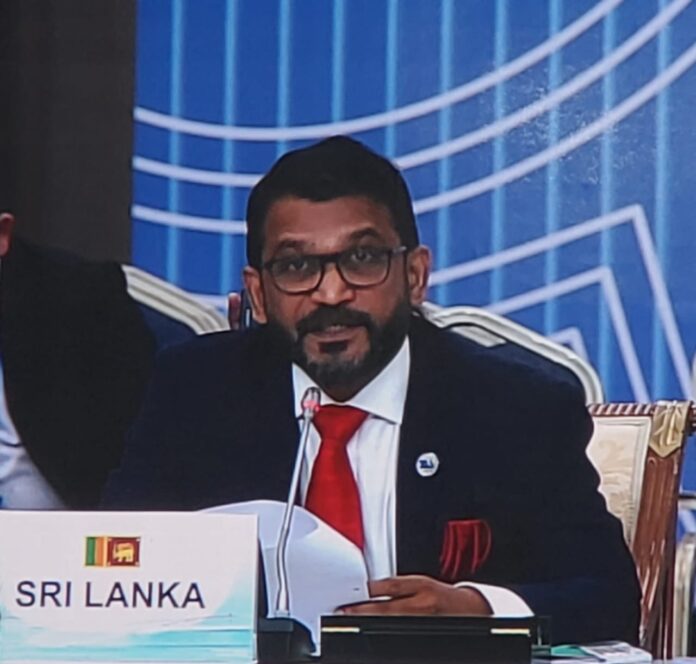 Leading Sri Lanka’s delegation to the Sixth Summit of the Conference on Interaction and Confidence Building Measures in Asia (CICA) in Astana, Kazakhstan from 12-13 October 2022, State Minister of Foreign Affairs Tharaka Balasuriya called on CICA to focus on the challenges encountered by the membership. He stressed the need to remain firmly committed to collectively identify the challenges, find viable solutions and follow the right strategies towards promoting inclusive and equitable growth in the region.

Minister Balasuriya made these observations when he addressed the Sixth Meeting of the Heads of State or Government of CICA in Astana, Kazakhstan on 13 October 2022. Speaking further, the State Minister of Foreign Affairs also stated that as an island with vast potentials in tourism, Sri Lanka encourages focus on tourism which is an important industry in Asia which has the capacity to strengthen bonds of understanding and friendship among the nations. He recalled that in 2021, Sri Lanka, in the capacity as the co-coordinator of Confidence Building Measures in Tourism, successfully conducted a  ‘Virtual Business to Business  Interactive Session with the CICA Member States to Enhance Tourism Cooperation’.

He also drew attention to Sri Lanka’s proactive role in CICA by pointing out the country has proposed several other activities to the CICA work plan aiming at greater integration and cooperation within the Tourism Industry in the region. Minister Balasuriya stated that Sri Lanka looks forward to receiving the fullest cooperation towards the successful implementation of these projects in the coming years.

Minister Balasuriya also expressed appreciation to the host Government of Kazakhstan for steering the sessions successfully as the current Chair of CICA and the role played by the CICA Secretariat which has given further impetus to the CICA process.

He also attended the luncheon hosted by the President of Kazakhstan Kassym-Jomart Tokayev, to the Heads of State or Government and delegation, attending the Summit.

State Minister Balasuriya who was accompanied by the Acting Additional Secretary at State Minister’s Office and Public Diplomacy, Sithara Khan, also met with Ministers from India, Kazakhstan and Azerbaijan on the sidelines of the Summit.

State Minister Balasuriya was also interviewed by the TV and Radio Complex of the President of the Republic prior to the commencement of the Summit.

CICA, which recently celebrated its 30th anniversary, is a multi-national forum for enhancing cooperation towards promoting peace, security and stability in Asia, which was formed on 5 October 1992, at the 47th Session of the United Nations General Assembly. With 27 Member States comprising approximately half the global population, CICA is the largest regional intergovernmental forum in Asia.