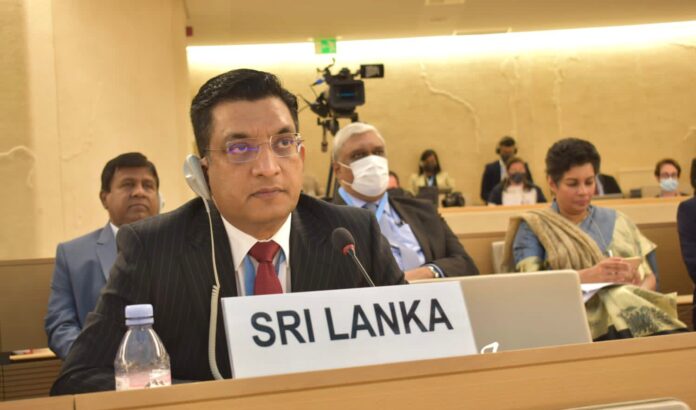 Sri Lanka will replace the Prevention of Terrorism Act PTA with a more comprehensive national security legislation in accordance with international best practices says the Minister of Foreign Affairs at the 51st  Regular Session of the United Nations Human Rights Council in Geneva.

The Government would endeavour to establish a credible truth-seeking mechanism within the framework of the Constitution. The contours of such a model that would suit the particular conditions of Sri Lanka are under discussion.

The recommendations of the Presidential Commission of Inquiry on “Appraisal of the Findings of Previous Commissions and Committees and the Way Forward” have, inter alia, resulted in the establishment of an Advisory Board under the Prevention of Terrorism Act (PTA), progressive amendments to the PTA, and the release of detainees. Further recommendations are awaited.

As we delivered on the onerous task of review and reform of the PTA this year, to further enhance human rights, we will replace the PTA with a more comprehensive national security legislation in accordance with international best practices.

At the outset, on behalf of our Government, I reiterate our unwavering commitment towards advancing, securing and protecting the human rights of our people, and continuing our engagement with the Council in a spirit of cooperation and dialogue. In keeping with our commitment, notwithstanding our categorical rejection of resolution 46/1, we have submitted Sri Lanka’s detailed written response to the High Commissioner’s Report. We have requested that Sri Lanka’s Comments be placed as an Addendum to the Report, to accord with best practices.

We remain cognizant of and acutely sensitive to the events that have taken place in the recent past. The severe economic crisis emanating from factors both internal and external offer many lessons for all of us. We recall in this context the indivisibility of human rights, as enshrined in the Vienna Declaration and Programme of Action. The Government is extremely sensitive to the socio-economic hardships faced by our people, and has initiated immediate multi-pronged measures to address the challenges and to ensure their wellbeing through the provision of supplies essential to the life of the community. A staff level agreement has been reached with the International Monetary Fund, and discussions on debt restructuring are in progress. The Government is in dialogue with UN agencies as well as bilateral partners to protect the most vulnerable from the adverse impacts of the crisis. In spite of multiple challenges, Sri Lanka would endeavour to remain on course in meeting the goals of the 2030 Agenda for Sustainable Development.

The recent changes that have taken place bear testimony to our continued commitment to upholding our longstanding democratic principles and norms. The constitutional rights to peaceful assembly and expression guaranteed the democratic space for our people to exercise their rights. In this regard, transgressions of the law resulting in criminal and unlawful activity were addressed in accord with the law and the Constitution, in circumstances where such freedoms were abused by elements with vested interests to achieve undemocratic political ends.

Notwithstanding the severe constraints and challenges, Sri Lanka remains firmly committed to pursuing tangible progress in the protection of human rights and reconcilation through independent domestic institutions.

Sri Lanka along with several Members of this Council have opposed resolution 46/1, fundamentally disagreeing with its legitimacy and objectives. We have consistently highlighted that the content of the resolution, its operative paragraph 06 in particular, violates the sovereignty of the people of Sri Lanka and the principles of the UN Charter. Once again, we are compelled to categorically reject any follow-up measures to the resolution, as well as the related recommendations and conclusions by the High Commissioner.

It is observed that the High Commissioner’s report makes extensive reference to “economic crimes”. Apart from the ambiguity of the term, it is a matter of concern that such reference exceeds the mandate of the OHCHR. In this context, we recall the paramount importance of adhering to UNGA resolutions 60/251, 48/141 and the IB package.

Notwithstanding, Sri Lanka has continued to brief the Council on the comprehensive legal framework that is being established to further strengthen governance and combat corruption. The proposed 22nd Amendment to the Constitution introduces several salient changes which would strengthen democratic governance and independent oversight of key institutions, as well as public scrutiny, participation in governance, and combating corruption including the constitutional recognition of the United Nations Convention Against Corruption (UNCAC). This will include, inter alia, the composition of the Constitutional Council, and the reintroduction of the National Procurement Commission and the Audit Service Commission. The proposed legal framework will also strengthen the asset declaration system, protect the rights of whistle blowers, and increase the independence of the Commission to Investigate Allegations of Bribery or Corruption.  A proposal to establish a system similar to an Inspector General tasked with overseeing government expenses by detecting and preventing fraud, waste and abuse in public institutions, is under consideration.

Measures aimed at promoting domestic reconciliation and human rights, if they are to be meaningful and sustainable, must be based on cooperation with the country concerned, be compatible with the aspirations of its people, and be consonant with its basic legal framework. The international community is aware that unconstitutional and intrusive external initiatives have repeatedly failed to yield meaningful results on the ground, and are in effect an unproductive drain on member state resources.

The Government would endeavour to establish a credible truth-seeking mechanism within the framework of the Constitution. The contours of such a model that would suit the particular conditions of Sri Lanka are under discussion.

The recommendations of the Presidential Commission of Inquiry on “Appraisal of the Findings of Previous Commissions and Committees and the Way Forward” have, inter alia, resulted in the establishment of an Advisory Board under the Prevention of Terrorism Act (PTA), progressive amendments to the PTA, and the release of detainees. Further recommendations are awaited.

As we delivered on the onerous task of review and reform of the PTA this year, to further enhance human rights, we will replace the PTA with a more comprehensive national security legislation in accordance with international best practices.

The recent delisting of groups and individuals will provide further impetus for constructive dialogue.

The independent statutory bodies established to advance the rights of victims and their families, and to provide reparations, continue to vigourously execute their respective mandates.

The Office on Missing Persons (OMP) has commenced the process of inquiry and verification, set up separate units on Tracing and Victim and Family Support, and acts as an Observer on relevant judicial proceedings.

Despite economic constraints, the Office for Reparations (OR) continues to deliver on its mandate, and the recently adopted National Reparations Policy and Guidelines have expanded the work of the Office beyond monetary compensation, to other forms of support.

The necessary support and resources to strengthen the functioning of the Office for National Unity and Reconciliation (ONUR) and the Human Rights Commission of Sri Lanka (HRCSL), continue to be provided.

As recognized in the Universal Declaration, human rights are interdependent, interrelated and indivisible. In upholding human rights, we have benefitted from the considerable expertise available with other countries as well as the United Nations. We will seek further advice and support on best practices as we proceed, and as deemed necessary.

We will continue our cooperation with the Human Rights Council and its mechanisms. Sri Lanka is party to the 9 core Human Rights Conventions, and has maintained regular and constructive engagement with the UN Treaty Bodies. We have extended a standing invitation to all UN thematic Special Procedures mandate holders to visit Sri Lanka, and facilitated a high number of visits in the recent past. We look forward to constructive engagement with the Council through the Universal Periodic Review process. We have delivered on our commitments at the UPR, and will proactively engage in the upcoming UPR fourth cycle.

We have facilitated two visits by the Office of the High Commissioner to Sri Lanka in May and August this year, and provided unimpeded access. The visits provided the officials of the OHCHR with the opportunity to engage with a range of stakeholders, and witness progress.

It is 13 years since the end of the conflict in Sri Lanka, and since then a new generation has emerged with their own aspirations. While issues of reconciliation and accountability are being comprehensively addressed through a domestic process, it is time to reflect realistically on the trajectory of this resolution which has continued on the agenda of the Council for over a decade, and undertake a realistic assessment on whether it has benefited the people of Sri Lanka. There is a need to acknowledge actual progress on the ground and support Sri Lanka.

The current challenges, though formidable, have provided us with a unique opportunity to work towards institutional change for the betterment of our people. Sri Lanka appreciates the solidarity and support extended by our friends and partners during this challenging time. In a message of unity and reconciliation, President Ranil Wickremesinghe in his inaugural address to Parliament said “if we come together, we will be able to invigorate the nation”.

Through many a challenge, the people of Sri Lanka have remained steadfast and resilient while upholding their democratic values as one of Asia’s oldest democracies. We are not hesitant to acknowledge our challenges and forge ahead with renewed vigour. While our immediate concern is economic recovery, advancing the human rights of our people is of equal priority. We look to the genuine support and understanding of this Council, as we proceed on this path.

Let’s build the country with a national policy that does not...