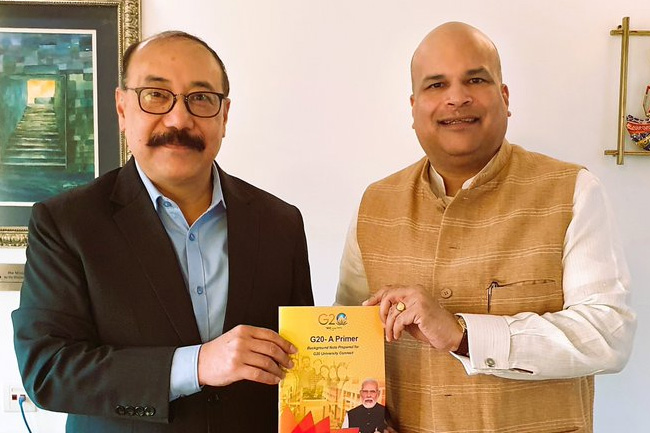 The opportunities available to Sri Lanka, as a neighbouring country of India, to engage with the work of the Group of 20 (G20) were discussed between Sri Lanka’s High Commissioner to India, Milinda Moragoda and Chief Coordinator for India’s G20 Presidency for 2023, Harsh Vardhan Shringla.

The duo met in New Delhi yesterday (12 Dec), and discussed the avenues through which Sri Lanka could engage with the Group of 20 (G20) during India’s presidency of the Group.

The discussion also focused on the possibility of understanding the G20 approach towards international financial cooperation and debt restructuring.

India assumed the presidency of the G20 on 01 December 2022 for a period of one year, and is expected to host over 200 G20 meetings in 56 cities across the country, beginning December 2022, during its tenure.

The G20 Leaders’ Summit at the level of Heads of State / Government is scheduled to be held on 09 and 10 September 2023 in New Delhi.

The G20 or Group of Twenty is an intergovernmental forum comprising 19 countries and the European Union, which works to address major issues related to the global economy, such as international financial stability, climate change mitigation, and sustainable development.

Donation of Medicine to Sri Lanka