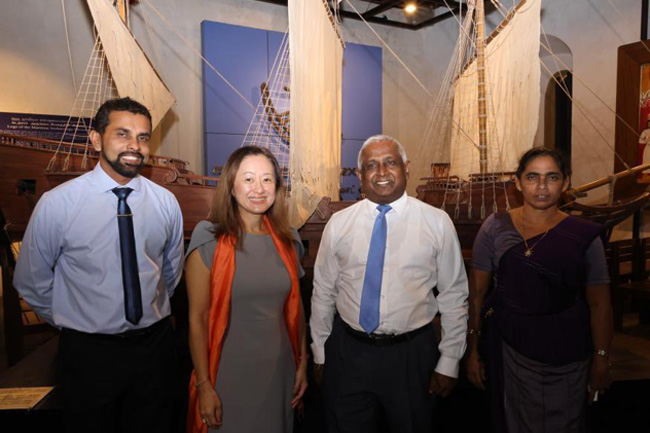 The United States has approved a grant of nearly USD 90,000 for the conservation of the Godawaya shipwreck, located off Sri Lanka’s Southern coasts, and its artifacts.

Accordingly, Sri Lanka’s Central Cultural Fund received a grant of USD 82,192 from the U.S. Ambassadors Fund for Cultural Preservation for the documentation and conservation of the site of the shipwreck and its artifacts.

The documentation will be undertaken by the Central Cultural Fund’s Maritime Archeology Unit, and upon completion of the project, the artifacts will be on display to the public in the Maritime Archeological Museum in Galle.

“By documenting the important role that Sri Lanka has played as a hub for the Indo-Pacific region’s travelers and traders from its earliest days, the United States hopes to help preserve and promote Sri Lanka’s magnificent cultural heritage,” U.S. Ambassador Julie Chung said.

Secretary to the Ministry of Buddhasasana, Religious and Cultural Affairs Somaratne Vidanapathirana, Director General of Central Cultural Fund Professor Gamini Ranasinghe, and Senior Archaeology Officer Rasika Muthucumarana were also present at the event held at the Maritime Archeological Museum inside the Dutch Fort.

The Godawaya, originally discovered by two Sri Lankan divers, is the oldest known shipwreck in the Asia-Pacific region and one of the oldest sunken vessels to be discovered in the world.

Located near the Hambantota port, it includes a mound of corroded metal bars and a scattering of other ancient cargo, including glass ingots and pottery.

Since 2001, the U.S. Ambassadors Fund for Cultural Preservation has funded 15 such projects in Sri Lanka, totaling assistance of $1,387,294.

Ambassador Mahinda Samarasinghe presents copies of his letter of credence as...