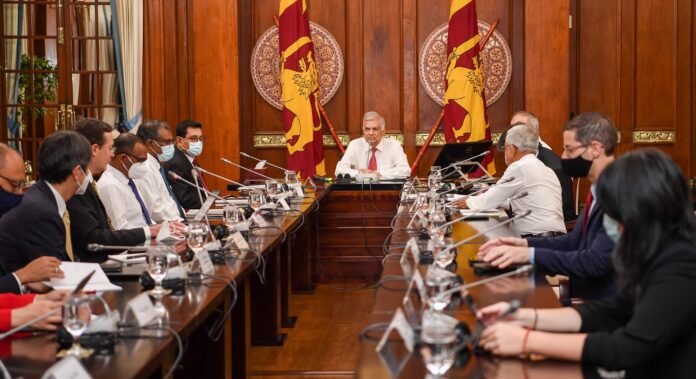 Not only rising from bankruptcy, it is also key to ensure that our social sectors are protected – Sri Lanka President said accepting the IMF staff level agreement.

President Ranil Wickremesinghe said that this is an important step in the history of Sri Lanka. “Not only rising from the bankruptcy crisis and the debt moratorium, it is also key to ensure that our social sectors are protected and both our economic and social aspect of our lifestyle will certainly not have any further setbacks.”

The President made this statement having reached a staff-level agreement between the Sri Lanka and the IMF.

Accordingly, President Wickremesinghe noted that he considers this to be the beginning of a new economic era where the country is committed to a very competitive export oriented industry while maintaining and improving social standards as well as looking after the vulnerable groups.

“The beginning will be difficult, but we know as we go on that we can make more progresses.  Our commitment is what  matters now and we should not only fulfill the targets here, but we must get ahead of them,” the President said, adding, “I appeal to the country, let us reorient ourselves to an export oriented economy which will also make it easier for us to sustain our social services.”

He also said that it also should be a beginning for the fact that Sri Lanka should reduce its debts and if possible, even eliminate its debts.

On a personal note, the President said, “I would like to say that when I was born, Sri Lanka had no debt and we had sufficient reserves to lend to the UK which was recovering from war times. We had made enough out of our rubber, and our tea and we built our first reservoir out of our own initiative. Now that was the government of Mr. D.S. Senanayake. And he believed in one principle that a nation and a person should be debt free. He was the Chairman of the Lay Organization of the Buddhist sects in this country and like all others, was

Committed to follow the doctrine that people should not get into debt and there should not be insolvency.”

Therefore, the President noted that if the country is to uphold Article 09 of the Constitution, it must follow that path. “You can’t pay lip-service only. And let this be the beginning and the way forward because on the 75th anniversary of our independence this is the best commitment we can make for the next 25 years.”

At the end of the mission, issuing a  statement the IMF team said the Sri Lankan authorities and the IMF team have reached staff-level agreement to support the authorities’ economic adjustment and reform policies with a new 48-month Extended Fund Facility (EFF) with a requested access of about SDR 2.2 billion (equivalent to US$2.9 billion).

The IMF team issuing a press release today (01) said that Sri Lanka has been facing an acute crisis. “Vulnerabilities have grown owing to inadequate external buffers and an unsustainable public debt dynamic. The April debt moratorium led to Sri Lanka defaulting on its external obligations, and a critically low level of foreign reserves has hampered the import of essential goods, including fuel, further impeding economic activity. The economy is expected to contract by 8.7 percent in 2022 and inflation recently exceeded 60 percent. The impact has been disproportionately borne by the poor and vulnerable.”

The agreement is subject to the approval by IMF management and the Executive Board in the period ahead, contingent on the implementation by the authorities of prior actions, and on receiving financing assurances from Sri Lanka’s official creditors and making a good faith effort to reach a collaborative agreement with private creditors. Debt relief from Sri Lanka’s creditors and additional financing from multilateral partners will be required to help ensure debt sustainability and close financing gaps.

The IMF team noted that against this backdrop, the authorities’ program, supported by the Fund, would aim to stabilize the economy, protect the livelihoods of the Sri Lankan people, and prepare the ground for economic recovery and promoting sustainable and inclusive growth.

Key elements of the program are: