In a dedicated search and rescue operation, Sri Lanka Navy rescued 04 fishermen, including a fisher trapped inside a multiday fishing trawler for 04 days, as their trawler was in distress in south-eastern waters, and rushed them to the Kalmunai Hospital for treatment 11 December. Reportedly, the fishing trawler had capsized about 46 nautical miles (85km) off the Sangaman Kanda Point, following adverse weather.

The fishing trawler “Himsara” (Reg. No. IMUL-A-0101-TLE) left the Trincomalee fisheries harbour on 26th November 2022, with 05 fishermen. On receipt of information of the distress to the Navy Headquarters, the Navy launched this search and rescue operation at the directives of Commander of the Navy, Vice Admiral Nishantha Ulugetenne, to retrieve the fishers from the watery grave.

After confirming about the developments through the Department of Fisheries and Aquatic Resources by the Maritime Rescue Coordination Centre (MRCC) Colombo, the Navy sent SLNS Ranarisi patrolling in south-eastern waters for the rescue of fishermen. Accordingly, naval personnel with the assistance of a local fishing trawler in the area rescued 03 fishermen from the capsized trawler. Based on information revealed by the rescuees, the Navy carried out a diving operation to locate 02 other fishers who were missing since the night of 07th December. After a strenuous effort, the Navy retrieved a fisherman trapped in the engine room for 04 days and brought him ashore aboard SLNS Ranarisi, administering him first aid. Accordingly, the final rescuee who was in critical condition along with 03 other fishermen were brought ashore promptly and they were rushed to the Base Hospital – Kalmunai for medical attention 11 December.

Further, the Navy is conducting a search and rescue operation in the sea area to find the other fisherman who was missing due to the incident. Remaining true to its duty, the Navy in coordination with the MRCC Colombo works in full swing to assist naval and fishing communities in distress in Sri Lanka’s search and rescue region. 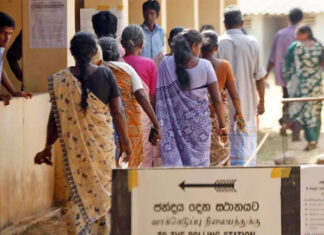 Charith Karunaratne - February 3, 2023 0
Postal voting for the 2023 Local Government election will be held on 22, 23 and 24 February, the Elections Commission says.