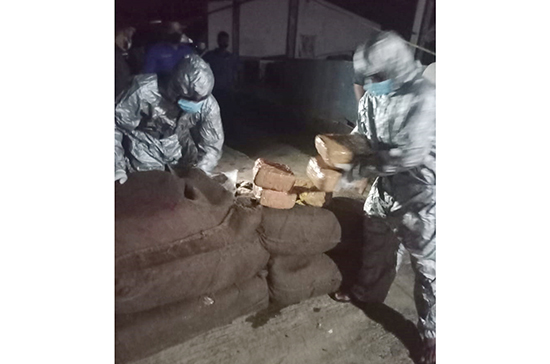 Special search operations conducted by the Navy in the seas off Karukupane in Chilaw and Madagal in Jaffna on 18th and 19th June 2021 led to the seizure of about 377kg 800g of Kerala cannabis. Accordingly, in the past 05 days alone, naval operations managed to seize heroin and Kerala cannabis worth over Rs.02 billion.

During a special operation conducted in coordination with Sri Lanka Army, the Navy searched a suspicious dinghy in seas off Karukupane on 18th June and recovered 05 gunny sacks thrown overboard, stuffed with about 238kg of Kerala cannabis in 98 packages. Accordingly, the dinghy along with a suspect onboard was taken into naval custody. The suspect held in this operation was identified as a resident of Chilaw, aged 46. The accused along with the haul of narcotics and the dinghy was handed over to the Chilaw Police for onward legal action.

Meanwhile, the Fast Attack Craft P 414 conducting further search in the above sea area today (19th June) recovered another gunny sack with 46 kg and 800 g of Kerala cannabis and the consignment was handed over to the Police Narcotic Bureau for onward investigation.

In a separate development, the Inshore Patrol Craft P 178 and P 106 seized about 93kg of Kerala cannabis in 03 gunny sacks, during a search operation in seas off Madagal today (19th June). The consignment had been cast away in seas, being unable to bring them ashore by smugglers as a result of naval operations in the area. Meanwhile, this stock of Kerala cannabis was set on fire and destroyed.

As such in the last 05 days alone, the Navy has seized about 219kg and 800g of heroin and over 746kg of Kerala cannabis worth over Rs. 02 billion of street value. Similarly, the Navy also apprehended about 1234kg and 600g of dried turmeric as well as around 364kg and 100g of Kendu leaves, while being smuggled into the country.

Against this backdrop, the Navy will continue to increase patrols in island waters with a view to ward off a wide range of nefarious activities including smuggling of drugs, originating via sea routes.

Charith Karunaratne - January 29, 2023 0
The Department Of Government Printing has not recieved a gazette notification that required to commence the Local Government Election process, the Government...