President Ranil Wickremesinghe has called for a meeting of South Asian nations to discuss the losses and damages caused by the melting of the glaciers in the Himalayas. He stated this while speaking at a breakfast meeting hosted by German Chancellor Olaf Scholz and Akufo-Addo, the President of the Republic of Ghana, the President’s Media Division (PMD) reported.

The President left the island for Egypt on Monday (06) to attend the 2022 United Nations Climate Change Conference (COP 27) being held in Sharm el-Sheikh.

At COP 27, countries come together to take action towards achieving the world’s collective climate goals as agreed upon under the Paris Agreement and Convention. Building on the outcomes and momentum of COP 26 in Glasgow last year, nations are expected to demonstrate at COP 27 that they are in a new era of implementation by turning their commitments under the Paris Agreement into action.

Meanwhile, President Wickremesinghe had also held bilateral meetings with the President of the Republic of Slovenia, Borut Pahor and the Special Presidential Envoy for Climate & Environment and the head of the delegation from the Republic of Korea, Na Kyung-won, on the sidelines of COP27 yesterday. 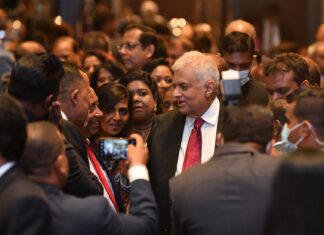