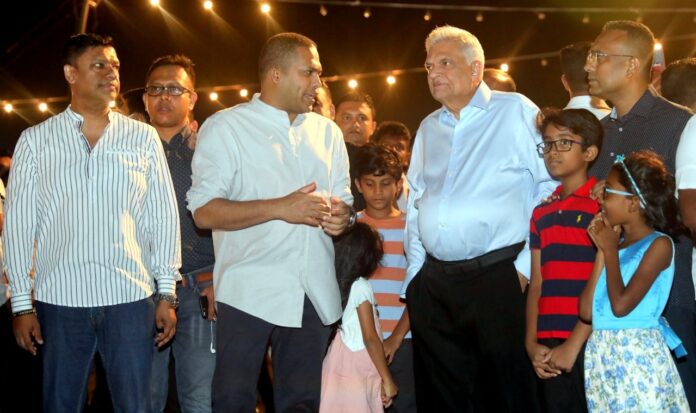 The special Christmas Carol concert and carnival organized by Sri Lanka Tourism, the armed forces and the police in the vicinity of the Presidential Secretariat premises was declared open by President Ranil Wickremesinghe December 18 afternoon.

This event was organized to give the people an opportunity to enjoy the Christmas spirit and a large crowd had gathered around the Presidential Secretariat and at Galle Face Green in Colombo, regardless of caste, creed or religion.

The President who visited the event, was cordially welcomed by the public and he engaged in friendly conversation with them.

The President also did not fail to interact with young children who had attended the event and was seen posing for photographs with them.

A Christmas carol performance was staged  at the Presidential Secretariat premises with the participation of the armed forces and police choirs and President Ranil Wickremesinghe watched the Christmas carol concert together with Ministers Harin Fernando and Manusha Nanayakkara, while sitting on the steps of the late  D.S. Senanayake statue.

Simultaneously, a band performance will be held with the participation of the armed forces and police bands, and the public will have the opportunity to enjoy the performance and the large Christmas tree erected on the carnival grounds.