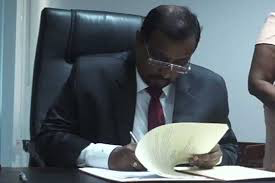 Mr. Amith Jayasundara has officially assumed duties as the new Commissioner General of the Department of Examinations this morning (Jan. 02).

He is the 21st Commissioner General to serve the Department of Examinations.

The appointment was made following the recent retirement of former Commissioner General of Examinations, L.M.D. Dharmasena.

Accordingly, he had officially assumed duties in the position this morning.

Mr. Jayasundara had previously served as the Commissioner of Examinations (Admin).

#WhatsAppDown: App not working as users unable to send or receive...