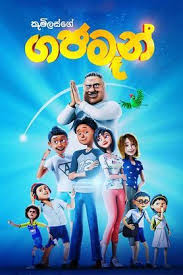 Directed by Chanaka Perera and co-produced by John Fonseka and Chamika Jinadasa for Studio 101, the 3D animation movie “Gajaman” is a breakthrough in Sri Lankan cinema.

This movie is based on the popular “Gajaman” cartoon by veteran Sri Lankan cartoonist Camillus Perera.

The two lead characters are dubbed by sought-after dubbing artist duo Suneth Chithrananda and Gaminda Priyaviraj who came to prominence as “Chooti Malli” and “Podi Malli” in a popular comedy sketch.

Meanwhile, the music for this movie was composed by Anushka Udana of Wasthi Productions.