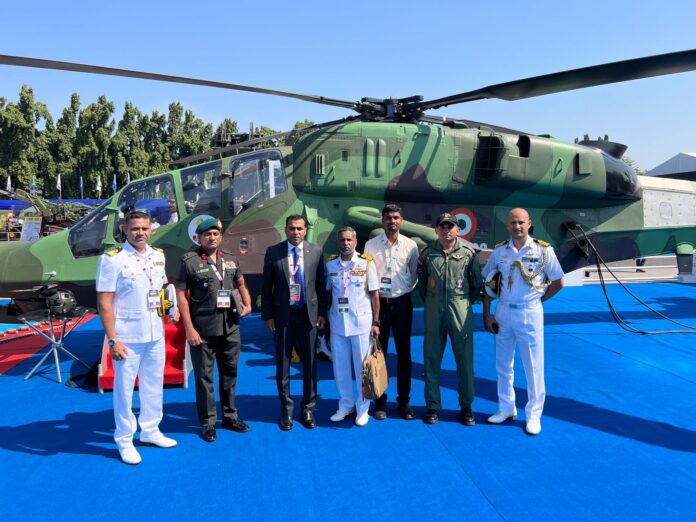 A three-member official delegation from Sri Lanka, led by State Minister of Defence Premitha Bandara Tennakoon and comprising Army and Navy officers, is currently on a visit to India for attending India’s premier biennial global defence exhibition DefExpo2022. The exhibition was inaugurated by Prime Minister Narendra Modi on 19 October 2022 at Gandhinagar, Gujarat. This is the second occasion in the past year during which a Minister from Sri Lanka is participating at an event inaugurated by Prime Minister Modi. It may be recalled that Ministers from Sri Lanka were a part of the inaugural international flight to Kushinagar airport in October 2021.

Speaking at DefExpo2022, State Minister Premitha Bandara Tennakoon hailed the partnership between India and Sri Lanka in the defence sphere.  He highlighted the importance of defence industrial base in augmenting Security policy and noted that DefExpo 2022 provided a great avenue for a deeper understanding of the nature of transformation in modern warfare across five dimensions.

DefExpo2022 is the biggest-defence exhibition, which showcases the growing prowess of India’s defence industry to achieve the vision of ‘Make in India, Make for the World’ as well as self-reliance in the defence domain. Live demonstrations showcasing the equipment and skill sets of the Armed Forces, Defence Public Sector Units and industry were also organized.

The Sri Lankan dignitary met the Minister of State for Defence and Tourism of India Shri Ajay Bhatt on 17 October 2022 along the sidelines of DefExpo2022.  During the meeting, India’s readiness to continue to support Sri Lanka in the defence sphere was reiterated. The Sri Lankan delegation also had cordial interactions with Defence Minister, Defence Secretary, Chief of Defence Staff and all three Service Chiefs of India during the visit.

Bilateral engagement in defence is multi-dimensional in nature. High level exchanges continued both ways despite the challenges posed by COVID-19. SLINEX (Naval Exercise) and exercise MITRA SHAKTI (Army Exercise) are held every year alternatively in India and Sri Lanka. Both Armed Forces collaborate closely in dealing with common security challenges such as drug and human trafficking.   The Colombo Security Conclave has emerged as a key security platform in recent times to address such issues at a regional level. The first ever Dornier maritime reconnaissance aircraft from India to enhance the maritime surveillance capabilities of Sri Lanka was inducted into Sri Lanka Air Force Fleet on 15th August 2022 in the august presence of President His Excellency Ranil Wickremesinghe.

Experience sharing and capacity building has been a key pillar of India-Sri Lanka defence cooperation, which is marked by great camaraderie and mutual benefit in enhancing our shared security. Indian military establishments including NDC have been the preferred choice of the Sri Lankan Armed Forces for decades and have produced leaders of Sri Lankan Armed forces. Annually, 1500-1700 slots are allocated to Sri Lankan trainees which amounts to around INR 500-550 million (more than USD 6 million). Similarly, Indian Armed Forces officers are also hosted by the friendly Armed Forces of Sri Lanka, including for specialized training modules in various fields such as counter insurgency.

Both sides cooperate also on humanitarian aspects such as averting large scale environmental damages,  expeditious supply of Liquid Medical Oxygen and other assistance materials, repatriation of around 700 Indian nationals back to their motherland with the assistance of Sri Lanka Armed Forces during COVID-19 etc.

The futuristic partnership between the two neighbours underscores India’s ‘Neighbourhood First’ policy as well as Security and Growth for All in the Region (SAGAR) doctrine. India will continue to strengthen its multi-dimensional cooperation with Sri Lanka for mutual benefit and also for enhancing regional peace, security and stability.