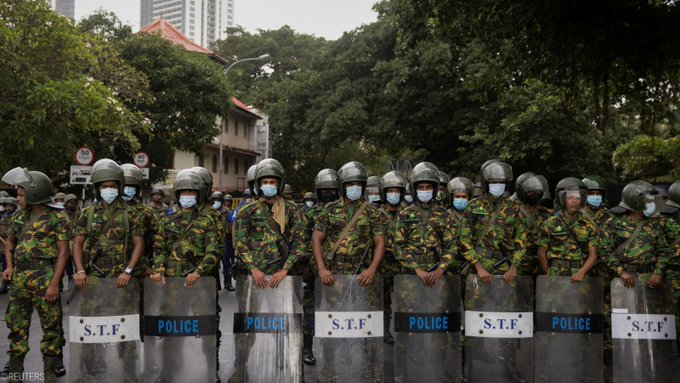 UN Human Rights Commission alarmed by the unnecessary use of force by security forces to break up a protest camp near presidential offices in Colombo. UNHRC condemn reports of beatings of protesters, journalists & lawyers & urge authorities to halt the use of force.

We are alarmed by the unnecessary use of force reportedly employed by Sri Lanka’s security forces to break up a protest camp near presidential offices in Colombo – only hours before the protesters indicated that it was due to be dismantled. We condemn the reports of beatings of protesters, journalists and lawyers.

In the early hours of Friday, when most of the protesters were sleeping, an estimated 2,000 security personnel, including police and military, stormed the area and tore down their tents. The security forces allegedly beat protesters and at least 48 people were injured. Protesters were not allowed to leave the protest site for several hours and those who were injured could not receive medical attention.

It was reported that security forces attacked journalists and lawyers, especially those trying to record the events or carrying cameras or phones, and at least two were arrested. At least four journalists were beaten and assaulted by the security forces. Two have been hospitalized. Property belonging to the protesters, including tents, IT equipment and kitchen items were destroyed or confiscated.

According to the Bar Association, two lawyers were assaulted by the security forces.

Journalists, lawyers and human rights defenders have a right to monitor and report on the demonstrations and therefore should be protected in the exercise of these functions and not obstructed in any way.

The use of force against peaceful protesters runs contrary to international law, and we urge authorities to immediately halt the use of such force. Under applicable international law, gatherings can only be dispersed in exceptional cases, with use of force as a last resort where absolutely necessary and proportionate to the lawful objective sought.

We have concerns that the raid on the camp sends a chilling message to peaceful protesters, including elsewhere in the country. Everyone has the right to peacefully demonstrate and to publicly express their frustration over the economic and political crisis, and the effect that it is having on their livelihoods and their families’ wellbeing.

Sri Lanka’s economic and political crises cannot be resolved by force. Only through broad consultations and dialogue, can Sri Lankans start rebuilding trust with the support of the international community. We hope the new President and his government will address impunity to bring genuine structural and institutional reforms for the benefit of all Sri Lankans.

Bhanuka Rajapaksa has withdrawn his letter of retirement

Trading at CSE halted for 30 minutes