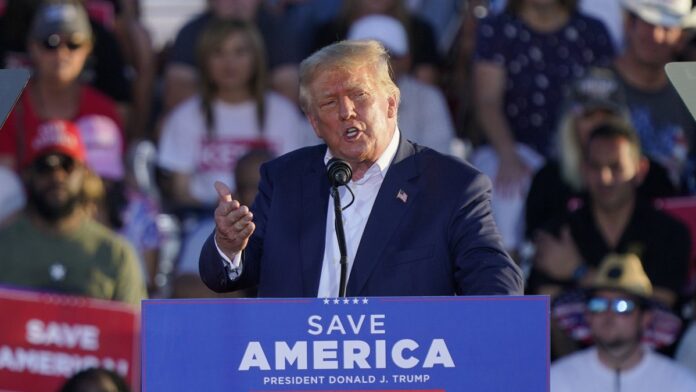 Former U.S. President Donald Trump announces he will run for president in 2024.

” I’m tonight announcing my candidacy in US. this won’t be my campaign this will be our campaign “.

PALM BEACH, Fla. — Donald Trump, the only president impeached twice, plans to seek a return to the Oval Office in 2024, he will say Tuesday, two years after voters ousted him and a week after they rejected his hand-picked candidates in several pivotal Senate races.

His plan was confirmed by a longtime adviser, just hours before he was due to begin speaking from his Mar-a-Lago resort.

Trump is at once the immediate front-runner for the Republican nomination and a diminished force within his party. As results rolled in from last week’s midterm election — with Democrats maintaining control of the Senate and Republicans winning a much smaller-than-expected majority in the House — some Republican elites began publicly clamoring for Trump to step aside for the good of the party.

His “big lie” — that the 2020 election was stolen from him — led to an insurrection at the Capitol Jan. 6, 2021, prompting investigations by the Justice Department and Congress that unfolded in the midst of this year’s midterms.

Despite losing that election by more than seven million votes with no signs of mass fraud, Trump insisted that he had won.

Trump to announce he will run for president in 2024

Petrol and Diesel shipments to arrive in Sri Lanka

Appointment of the High Commissioner of Australia to Sri Lanka