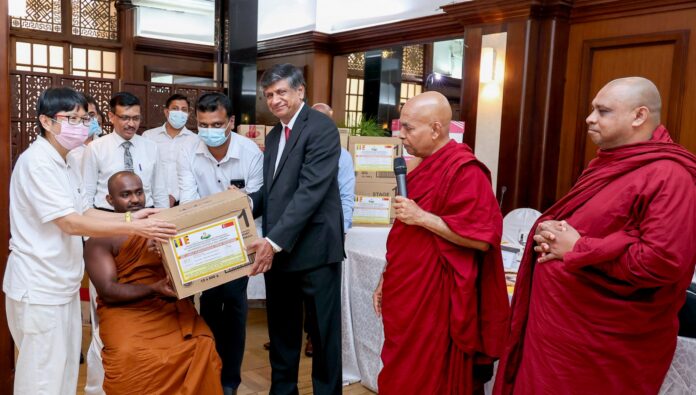 The distribution of aid to the Piriven in the remote areas of Sri Lanka to enhance their education, under the courtesy of the Sri Lankarama Buddhist Temple in Singapore was symbolically held evening (04) at the President’s Office. The event was headed by Secretary to the President Saman Ekanayake.
The necessary educational equipment amassed with the assistance of the donors in Singapore, for the education of the Ven. Theras and children who are receiving education in remote areas in the island were handed over to President’s Secretary.
The educational equipment will be distributed to the selected piriven within the next few days.

This assistance was received following a request made by the Sri Lankarama Buddhist Temple in Singapore from Saman Ekanayake while he was serving as the secretary to the Prime Minister, to extend their support to the piriven education.
The Ven Maha Sanga including Chief incumbent of the Sri Lankarama in Singapore Ven. Karadetiyana Gunarathana Thero, Ven. Mahamevnave Mangala Thero, representatives from Singapore, Additional Secretary to the President Buwaneka Herath , Senior Advisor to the President Suren Batagoda and several other officials participated in the event.