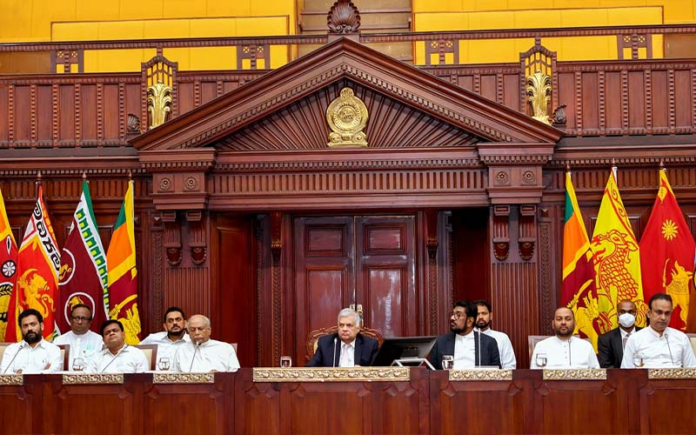 A country’s security is not only ensured militarily but is also secured through food and economic security, President Ranil Wickremesinghe emphasised.

The President said this during the progress review meeting of the National Food Security and Nutrition Assurance Program held at the Presidential Secretariat on October 11.

Emphasizing that urgent measures should be taken to provide the country with fuel and food, the President said that if necessary, he could intervene through state security regulations.

The President also noted that if the implementation of the food security and nutrition assurance program is hampered due to the collapse of the state machinery, he is ready to intervene at any moment to resolve these issues.

President Ranil Wickremesinghe also pointed out the need to modernize agriculture and enact legislation on food security through this program.

The multi-sectoral joint mechanism to empower rural economic revitalization centres to ensure food security and nutrition was recently implemented across the island under the theme “No citizen should be allowed to starve due to the lack of food”, on the directives of President Ranil Wickremesinghe.

Also, the progress of the program at the district level was examined during this discussion and it was stated that rural economic revitalization committees have been established at the village level in all districts and programs have been initiated to ensure food security and nutrition.

Discussions also centred on the issues that could arise during the cultivation process in the relevant districts, while special attention was placed on the supply of fertilizer, land issues, unavailability of seeds and the crop damage caused by wild animals.

President Ranil Wickremesinghe stated that measures have been taken to solve these problems in consultation with the relevant institutions and instructed the authorities to expedite the process of resolving the issues that further remain to be resolved.

Having paid attention to the progress presented by the district secretaries about the implementation of the program in each district the President informed the officials to identify separately the crop cultivations done at the rural level to create food security and to identify the areas suffering from food shortages and submit a report on the matter immediately.

Based on this information, the President also directed the officials to implement a food bank and community kitchen programs to cover every district under the leadership of the District Secretaries.

Further, the President instructed the relevant departments to continue implementing this program until 2023, mustering the contribution of all the government officials, armed forces, civil defence force, government and non-governmental organizations, to ensure the nutritional needs of the people and to prepare for the world economic crisis that may occur in the future, through this programme.
The President further stated that after 03 weeks, a report on the progress of this program should be sent to the Cabinet every week.

Speaking at this discussion, Prime Minister Dinesh Gunawardena pointed out the need to speed up the provision of land for new cultivators and follow a formal system for it.

He also noted that the upcoming rainy season is conducive to cultivation and highlighted the importance of educating the people at the rural level on engaging in agricultural activities without delay.