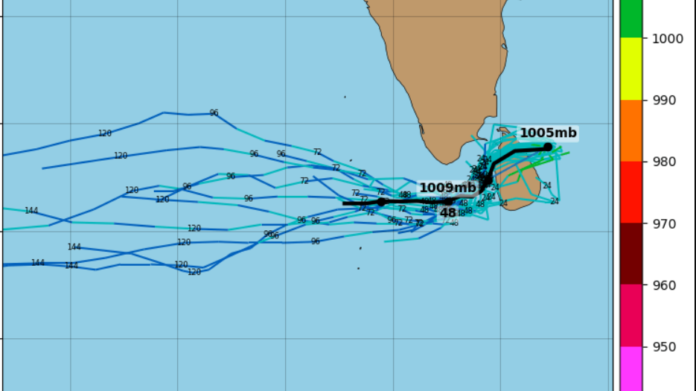 Update – Depression over Southwest Bay of Bengal crossed Sri Lanka coast south of Trincomalee and now weakened into a well marked low pressure area over Sri Lanka. System is moving across the country. It is likely to move to the western sea area of Sri Lanka by December 26.

Showers or thunder showers will occur at times over most parts of the country. Very heavy showers above 150 mm can be expected at some places in Eastern, Uva, central, Sabaragamuwa, Western, Southern and Northwestern provinces and in Polonnaruwa district.

Fairly heavy showers above 75mm can be expected at some places elsewhere. Strong gusty winds of about (40-50) kmph can be expected at times over country. General public is kindly requested to take adequate precautions to minimize damages caused by temporary localized strong winds and lightning during thundershowers.

Trading at CSE halted for 30 minutes