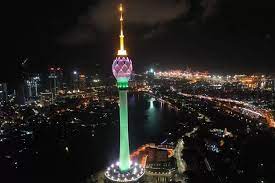 Sri Lanka’s Lotus Tower, a landmark in Colombo, has received half a million visitors by Friday morning since the tower opened to public, said its management.

Head of Lotus Tower management Prasad Samarasinghe told reporters that the 500,000th ticket was sold to a person who arrived from Matara in Sri Lanka’s Southern Province and he was rewarded with a plaque and gift voucher.

Over 268 million rupees (730,000 U.S. dollars) of revenue has been collected since the tower was opened to public, Samarasinghe said.

Sri Lanka and China signed the Lotus Tower agreement in 2012 to build the highest TV tower in South Asia, with a Chinese company being the general contractor.

The Lotus Tower was opened to public in September 2022.