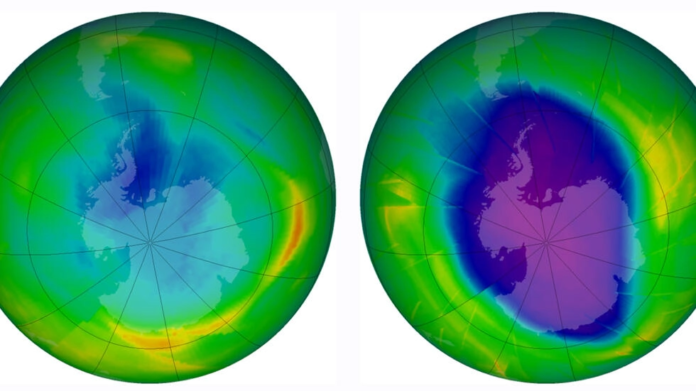 The ozone layer is on track to recover within four decades, with the global phaseout of ozone-depleting chemicals already benefitting efforts to mitigate climate change. This is the conclusion of a UN-backed panel of experts, presented today at the American Meteorological Society’s 103rd annual meeting. Examining novel technologies such as geoengineering for the first time, the panel warns of unintended impacts on the ozone layer.

The UN-backed Scientific Assessment Panel to the Montreal Protocol on Ozone Depleting Substances quadrennial assessment report, published every four years, confirms the phase out of nearly 99% of banned ozone-depleting substances has succeeded in safeguarding the ozone layer, leading to notable recovery of the ozone layer in the upper stratosphere and decreased human exposure to harmful ultraviolet (UV) rays from the sun.

“That ozone recovery is on track according to the latest quadrennial report is fantastic news. The impact the Montreal Protocol has had on climate change mitigation cannot be overstressed. Over the last 35 years, the Protocol has become a true champion for the environment,” said Meg Seki, Executive Secretary of the United Nations Environment Programme’s Ozone Secretariat. “The assessments and reviews undertaken by the Scientific Assessment Panel remain a vital component of the work of the Protocol that helps inform policy and decision makers.”

The 10th addition of the Scientific Assessment Panel reaffirms the positive impact that the treaty has already had for the climate. An additional 2016 agreement, known as the Kigali Amendment to the Montreal Protocol, requires phase down of production and consumption of some hydrofluorocarbons (HFCs). HFCs do not directly deplete ozone, but are powerful climate change gases. The Scientific Assessment Panel said this amendment is estimated to avoid 0.3–0.5°C of warming by 2100 (this does not include contributions from HFC-23 emissions).

“Ozone action sets a precedent for climate action. Our success in phasing out ozone-eating chemicals shows us what can and must be done – as a matter of urgency – to transition away from fossil fuels, reduce greenhouse gases and so limit temperature increase,” said WMO Secretary-General Prof. Petteri Taalas.

The latest assessment has been made based on extensive studies, research and data compiled by a large international group of experts , including many from the World Meteorological Organization (WMO), United Nations Environment Programme (UNEP), National Oceanic and Atmospheric Administration (NOAA), National Aeronautics and Space Administration (NASA) and European Commission.

For the first time, the Scientific Assessment Panel examined the potential effects on ozone of the intentional addition of aerosols into the stratosphere, known as stratospheric aerosol injection (SAI). SAI has been proposed as a potential method to reduce climate warming by increasing sunlight reflection. Yet the panel cautions that unintended consequences of SAI “could also affect stratospheric temperatures, circulation and ozone production and destruction rates and transport.”

Price of a rice packet increased