Tourist arrivals to the country saw a significant increase in the month of November, with the number of international visitors entering the country growing by 42 percent from October. 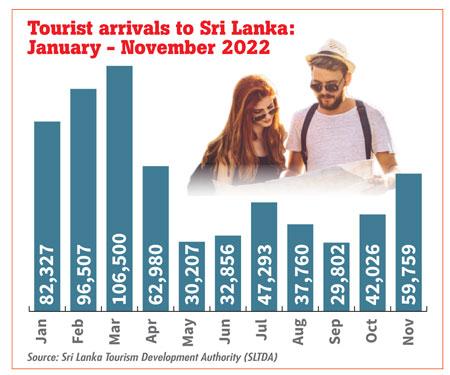 The provisional data released by the Sri Lanka Tourism Development Authority showed that in November, Sri Lanka welcomed a total of 59,759 tourists. The numbers recorded for the 11th month show the island nation has lured a total of 628,017 tourists for the year 2022 so far.

Similarly, the weekly analysis shows that the month of November has been successful in maintaining tourist arrivals above 12,000 for five consecutive weeks, starting October week four. While the first three weeks of November tourist arrivals were 12,431, 13,051 and 14,298, the final week saw arrivals jumping
by over 5,000.

For the November 22-30 period, tourist arrivals totalled 19,979. The last time weekly tourist arrivals crossed the 19,000 mark was in the first week of April, when tensions from the economic and political crisis were building up in the island nation.

The growth in tourist arrivals witnessed in November is due to the increase in the number of international airlines flying to Colombo. Further, for the first time since the outbreak of the Covid-19 pandemic, Sri Lanka welcomed nearly 4,000 tourists by sea in November.

Maintaining the streak as the largest tourist traffic generator for destination Sri Lanka is the Russian Federation, which accounted for 23 percent of the total arrivals for the month of November.