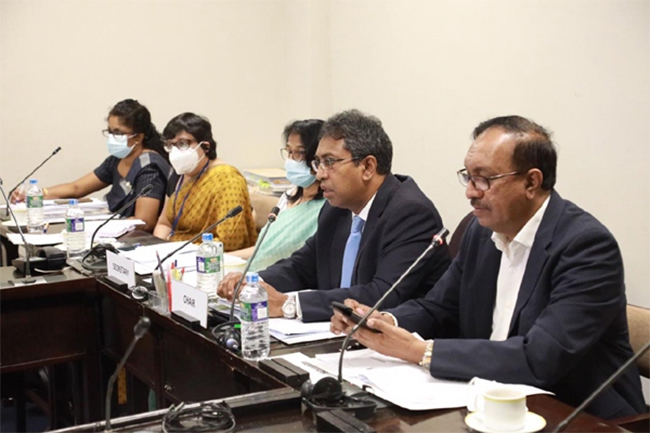 A proper system should be implemented to collect taxes properly on non-cash benefits starting from the President of the country to all ministers, members of parliament and officials, the chairman of the Committee on Public Finance (COPF) MP Harsha De Silva says.

Explaining that non-cash benefits include vehicles, houses, employees, etc. owned by a person holding a certain position, the COPF chairman pointed out that these taxes should be carefully looked into, considering all elements.

MP De Silva made these remarks when the Inland Revenue Department (IRD) was summoned by the COPF recently (Jan. 10) to discuss the Road Map for Tax Collection for the year 2023.

The largest amount of anticipated tax revenue in 2023, amounting to Rs. 603 billion, is expected from corporate income tax. The local revenue officials also indicated that an income of Rs. 553 billion is expected from the value-added tax (VAT).

The committee also discussed at length the strengthening of this tax collection program and the IRD gave information about the problems including the delay in the cases in the court related to tax payment defaults. The chairman of the committee said that the COPF will intervene to review these problems and provide solutions.

Accordingly, the COPF chairman informed the Inland Revenue Department to report to the committee in February about the progress of tax collection.

The attention of the committee was also drawn to some media reports, that taxes were levied on the pension of disabled war heroes. The officials of the Inland Revenue Department pointed out that no such tax is levied on a pension in any way.

The regulations in Gazette No. 2307/12 under the Import and Export Control Act were also submitted to the committee for approval. This gazette was published to ease the import restrictions imposed on sports items, railway spare parts, and certain items in the cosmetics industry.

The committee approved the gazette and stressed that it is preferable to allow the import of products required for industries such as tourism and cosmetics under the recommendations of the relevant institutions by charging a higher tax. Otherwise, it was discussed in the committee, that the black market businesses cannot be prevented in this regard.

Furthermore, the Committee approved the orders under the Foreign Exchange Act published in Gazette No. 2308/51.