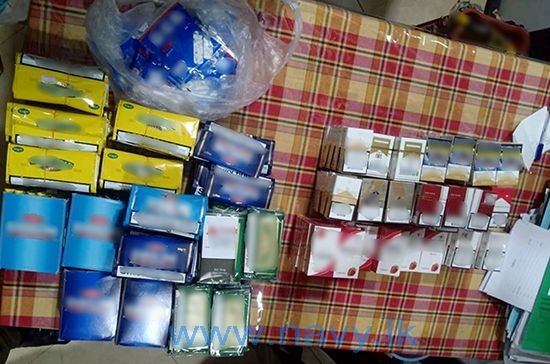 A coordinated search operation carried out by the Navy and the Office of Excise Department in Galle led to the apprehension of 02 suspects with 120 packets of foreign cigarettes, over 05kg of tobacco powder and 2400 cigarette filters in Ahangama today (18th January 2022).

Sri Lanka Navy, together with the law enforcement agencies of the country, conducts regular search operations to curb illegal activities. Based on information received by the Navy, this combined search operation was conducted with the Office of Excise Department at the Bus Stand of Ahangama on 18th January. Thus, the operation led to the apprehension of 120 packets of foreign cigarettes, 05kg and 150g of tobacco powder and 2400 cigarette filters made ready to be sold illegally at two retail shops. Meanwhile, 02 suspects in connection to the incident were also apprehended during this raid.

The suspects apprehended in the raid were identified as residents of Habaraduwa and Ahangama, aged 40 and 41.

The apprehended suspects along with the tobacco products were handed over to Office of Excise Department in Galle for onward action.

81 students who were addicted to ICE, rehabilitated