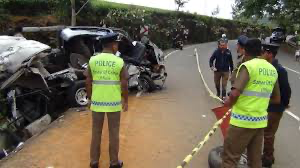 The driver of the bus involved in the recent collision in Nanu Oya that claimed the lives of seven people including children, has been remanded till 01 February.

The order was issued by District Judge Nalaka Sanjeewa Edirisinghe this afternoon (22 Jan.), when the suspect was produced before the Nuwara Eliya Magistrate’s Court.

Preliminary investigations have revealed that the fatal accident was cause due to the bus driver’s careless driving.

Seven casualties were reported on Friday (20 Jan.), when a bus fell down a 100-foot precipice on the Radella – Nuwara Eliya Shortcut Road, after colliding with a van and a three-wheeler.

All six persons travelling in the van, including the driver, and the driver of the three-wheeler died on the spot, while 53 passengers including students in the bus sustained injuries.

The five persons travelling in the van are reportedly related, while three children aged 8, 12 and 19 are also among the deceased.

Meanwhile, six persons who were injured in the accident have been transferred to the Colombo National Hospital, while three others are still receiving treatment at the Nuwara Eliya General Hospital.
All others who sustained minor injuries have been discharged, Sri Lanka Police reported.

The bus, which was en route to Colombo, was one of seven such buses that had been transporting a group of students of Thurstan College, Colombo, who were on an educational tour in Nuwara Eliya.

Reports revealed that 53 passengers – including teachers, parents and 41 students of Grade 11 – were inside the bus at the time of the accident.

The Shortcut Road in question was previously closed for heavy vehicles, however, heave vehicles began using the road once again after it was carpeted and built properly.

Sajith Premadasa rejected to take up the post of Prime Minster

Instructions from the President celebrate the 75th Independence celebration with pride,...