The Inter University Students’ Federation IUSF has decided to launch wave of protests island-wide demanding the release of their student leaders including the IUSF Convener Wasanttha Mudalige. Protests will be held in Colombo, Gampaha, Galle, Kandy, Anamaduwa, Kegalle and Walasmulla towns today August 9.

Five student activists including the Convener of the IUSF and President of the Jayewardenepura University Students’ Union Amila Sandeepa have been arrested on August 6. They have been arrested by the Thalangama Police for holding a protest on August 03 near the Parliament against the Kotelawala Defense University Bill, seriously injuring the Maharagama Police OIC during the protest, damaging the road by burning a coffin and for violation of inter-provincial travel restrictions transporting people to Colombo in vans.

Wasantha Mudalige and Amila Sandeepa were remanded till August 11. 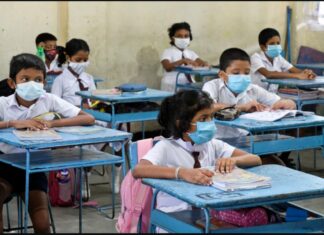 admin - September 17, 2021 0
Sri Lanka to administer the Pfizer-BioNTech COVID-19 vaccine to children between the ages of 15 and 19 years, based on the medical...

An associate of drug trafficker “Panadure Salindu” arrested along with 750g...

Pregnant woman dies of COVID19, doctors manage to save the baby