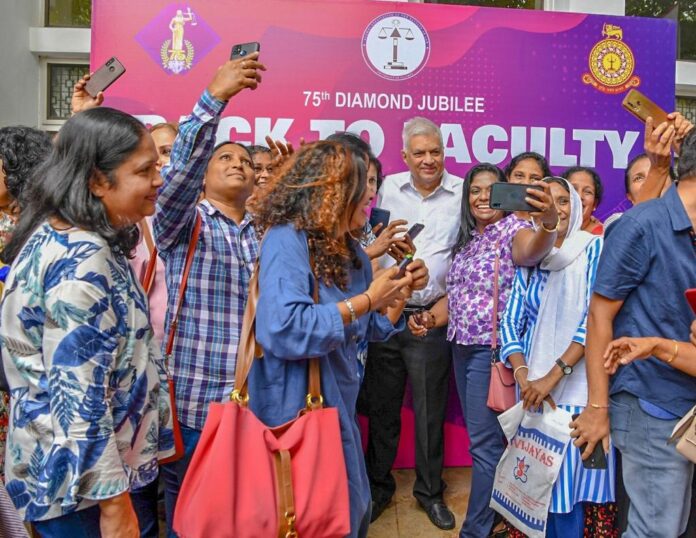 Sri Lanka President Ranil Wickremesinghe said that the government would assist the Colombo University to improve its quality.

The President made this observation during a discussion at the Dean’s Office of the Law Faculty having taken part in the Back to the Faculty-Faculty of Law, at the University of Colombo, which was organized to mark its 75th Diamond Jubilee today (10). The President participated in the event as the first alumnus of the Colombo Law Faculty who became the Executive President of the country.

The casual discussion held with the participation of the Vice Chancellor of the University Prof. H. D. Karunaratne, Dean of the Faculty of Law Prof. Sampath Punchihewa, Parliamentarians Professor G. L. Peiris and Madura Withanage, President’s Counsel Ronald Perera and several others.
The President, during the discussion, instructed the university authorities to prepare a program to establish the postgraduate institute and to recruit permanent staff to it to enhance the quality of university education. He said that the focus should be drawn to bringing the university among the best universities in the world rather than developing more and more of its infrastructure facilities. This is how the university could attract foreign students into the country, he added.

He as well as several others recalled that the education of the law faculty was qualitatively high in the past even when the infrastructure facilities were not as good as today. During the discussion, the President also inquired about the progress of the planning to construct the engineering faculty at the Colombo University to which the authorities said that an area of four acres had been allocated.

On President Ranil Wickremesinghe’s arrival, he was received by the Vice Chancellor of the University, Dean of the Faculty of Law, and Secretary to the Law Faculty’s Law Society Senaka de Seram at the entrance of the Law Faculty.
The President posed for selfie photographs with the alumni on their request and a group photograph as well.
Over a thousand alumni were present at the occasion including Professor Prathiba Mahanamahewa, and Attorney-at-Law Shiral Lakthilaka.