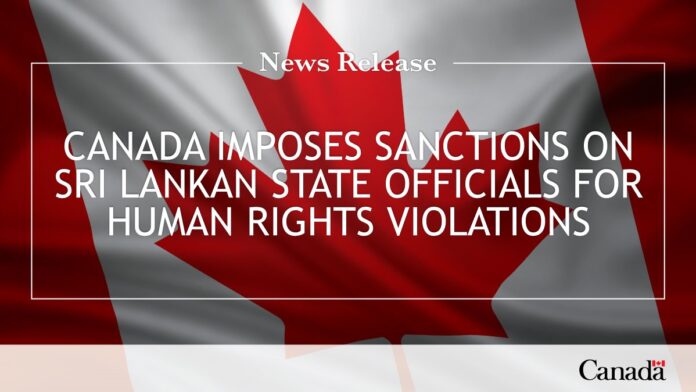 The regulations pursuant to the Special Economic Measures Act impose on listed persons a dealings prohibition, which would effectively freeze any assets they may hold in Canada and render them inadmissible to Canada under the Immigration and Refugee Protection Act.

Despite continued calls from Canada and the international community to address accountability, the Government of Sri Lanka has taken limited meaningful and concrete action to uphold its human rights obligations. This jeopardizes progress on justice for affected populations, and prospects for peace and reconciliation.

Victims and survivors of gross human rights violations deserve justice. That is why Canada continues to call on Sri Lanka to fulfill its commitment to establish a meaningful accountability process.

These sanctions send a clear message that Canada will not accept continued impunity for those that have committed gross human rights violations in Sri Lanka.

Canada will continue to collaborate alongside international partners, including through relevant multilateral bodies to advocate for human rights and accountability in Sri Lanka, which is an important step toward securing a safe, peaceful and inclusive future for the country. Canada, as part of the Core Group on Sri Lanka at the United Nations Human Rights Council will continue to advocate for the full implementation of resolution 51/1 and support efforts towards attaining accountability and peace on the island.