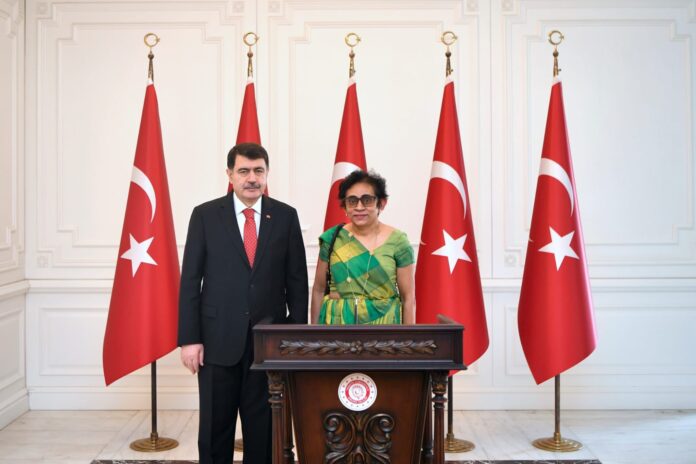 The Ambassador of Sri Lanka to Türkiye, S. Hasanthi Urugodawatte Dissanayake paid a courtesy call on Governor of Ankara, Vasip Şahin recently and had a fruitful discussion on strengthening bilateral relations between Türkiye and Sri Lanka.

Ambassador Dissanayake recalled Sri Lanka’s long standing bilateral formal relations which began with the appointment of an Honorary Consul to Sri Lanka in 1864 with residence in Galle during the Ottoman Empire.

During the meeting, the Ambassador indicated the significance of the year 2023 for Türkiye and Sri Lanka, as both countries are to celebrate 75 years of Anniversary of Establishment of bilateral diplomatic relations, 75th Anniversary of Independence Day of Sri Lanka and 100th Anniversary of Republic Day of Türkiye.

The Governor Vasip Şahin stressed on  the strategic location of Sri Lanka and Sri Lanka’s importance to Türkiye in terms of Trade and strengthening bilateral relations between Sri Lanka and Türkiye.

In this context, the Governor and the Ambassador agreed that while it is important to consider the historical relations, enhancing bilateral relations beyond economic cooperation, would mutually benefit both countries.

During the meeting, Ambassador Dissanayake and Ankara Governor Vasip Şahin discussed increasing bilateral trade including the volume of tea, which could contribute to the target of Turkiye to reaching 500 million USD in bilateral trade with Sri Lanka. Ambassador emphasized that the Turkiye is missing out on enjoying the value added specialty teas of Sri Lanka due to high taxes.Ambassador also stated that the embassy is already working with the Turkish Airlines to promote Tourism between the two countries.

Further the Ambassador extended her appreciation of Turkiye’s generosity by providing humanitarian aid to Sri Lanka in the aftermath of 2004 Tsunami and the recent donation of medical supplies in 2022.  The increasing opportunities in Turkiye, particularly in the hotel and construction sector for Sri Lankans,  too was appreciated.

The Ambassador also proposed on the possibility of establishing sister city collaboration between the cities of Ankara and Colombo as a way to celebrate 75 years of diplomatic relations between the two countries and the Governor expressed his interest in pursuing the same through an MoU.

The Governor assured his assistance and fullest cooperation to the Ambassador on all her initiatives during her tenure in Ankara.