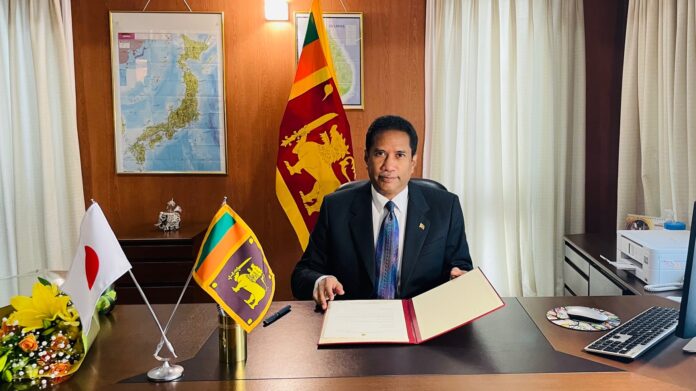 Newly appointed Ambassador of Sri Lanka to Japan, E. Rodney M. Perera assumed duties on 27 October 2022 at the Sri Lanka Embassy in Tokyo. He is the eighteenth Sri Lanka Ambassador to Japan during last 70 years of bilateral relations between the two countries.

Ambassador Perera addressed the gathering and invited the Sri Lankan community to engage Mission officials and expressed the benefit of working together as one team to support the efforts of the Embassy of Sri Lanka to further enhance bilateral relations with Japan. He also explained that, as stated by the President of Sri Lanka during his recent visit to Japan, there is a vital need to rebuild the ties between the two countries to reach the full potential of this time-tested multifaceted mutually beneficial partnership.

He elaborated that Japan and Sri Lanka could jointly address some areas such as food security, energy security and maritime safety that have an impact on both countries.

Referring to the speech of former President J R Jayawardena at the San Francisco Peace Conference in 1951, the Ambassador explained the need to learn from Japan and emulate how they rebuilt the country and allowed new technology and innovation to reinvigorate the economy to its current status. Reflecting on the important role that can be played by Japan at this critical juncture for Sri Lanka, he recalled the Comprehensive Partnership that was agreed upon by the two countries in 2015 and the numerous projects for which Japan had generously committed a significant amount of financial resources. He also recalled the Tokyo Donor Conference in 2003 in which Japan mobilized global economic support for Sri Lanka.

He stressed on the need to capitalize on Sri Lanka’s strategic location, its access to South Asia and Southeast Asia through the use of trade agreements such as FTA’s to find innovative ways to increase country’s trade volumes and income to generate much needed foreign currency. He noted the importance of product diversity and collaborations with established Japanese business enterprises to build investor confidence and the need to develop viable supply chains and increase investments particularly in IT and banking sectors. Promoting Japanese travelers to visit Sri Lanka and making full use of the employment opportunities made available for Sri Lankans by Japan remain immediate priorities of the Embassy in Tokyo.

Expanding into cultural and educational diplomacy, Ambassador Perera expressed his wish to expand collaborations with cultural, educational and religious institutions, to increase research activities and student exchanges. He added that there is tremendous potential for Sri Lanka to grow in the fields of fisheries and mineral industry. As means to promoting Sri Lanka throughout Japan, he proposed to increase engagement with all 47 prefectural governments to seek commonalities with Sri Lanka and understand competencies of each prefecture. Image building of Sri Lanka in Japan and creating a fresh narrative about Sri Lanka was also elaborated.

Ambassador E. Rodney M. Perera brings with him four decades of professional education, global travel, speaking opportunities, and interactions concerning Sri Lanka’s relations with the rest of the world. Having worked across all regions of the world, and carried out research, he possesses a uniquely global perspective in the realm of international relations vis-à-vis Sri Lanka. Ambassador Perera as a member of the Sri Lanka Foreign Service has functioned as the Additional Secretary of the Foreign Ministry and overseen key areas relating to Political Affairs, Public, Cultural and Economic Diplomacy, Administration, and welfare of Sri Lankan workers overseas, productively engaging with Sri Lankan communities across the globe.

His first overseas diplomatic assignment was to the Embassy of Sri Lanka in Japan as Second Secretary. Thereafter, he served as First Secretary of Sri Lanka’s Permanent Mission to the United Nations in New York; Acting High Commissioner of the Sri Lanka High Commission in Kenya, Sri Lanka’s Ambassador to Italy, Norway, Belgium (also European Union) and in his last overseas assignment he was the Ambassador of Sri Lanka to the United States of America in Washington D.C. until the end of 2020. During the past two years, he led research projects encompassing the Pre-historic period, the Political and Cultural History and the evolution of international relations of Sri Lanka from ancient times.

Ambassador Perera has a Bachelor of Business Administration in Management Information Systems and later, a Master of Arts Degree in International Studies from Columbia University in New York. He had his school education from St. Joseph’s College of Colombo.

Do not worry about the payment of government employee salaries or...

CNN Travel lists Jaffna amongst 18 most underrated places in Asia