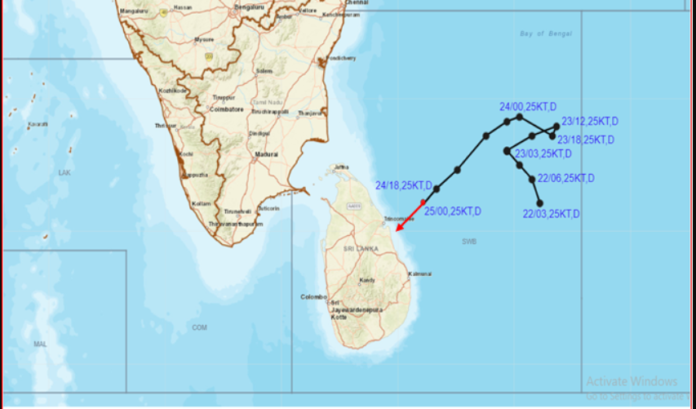 Update – Depression over Southwest Bay of Bengal has entered through the east coast of Sri Lanka and now moving across the country. It will move away December 26 evening.

Depression over Southwest Bay of Bengal lay centered at 0530 hrs IST of 25th Dec about 110 km east-northeast of Trincomalee (Sri Lanka). To cross Sri Lanka coast around Trincomalee by noon of today, the 25th December. Thereafter, it would emerge into Comorin Area by 26th December morning.

Showers or thunder showers will occur at times over most parts of the country. Very heavy showers above 150 mm can be expected at some places in Eastern, Uva, central, Sabaragamuwa, Western, Southern and Northwestern provinces and in Polonnaruwa district.

Fairly heavy showers above 75mm can be expected at some places elsewhere.

Strong gusty winds of about (40-50) kmph can be expected at times over country.