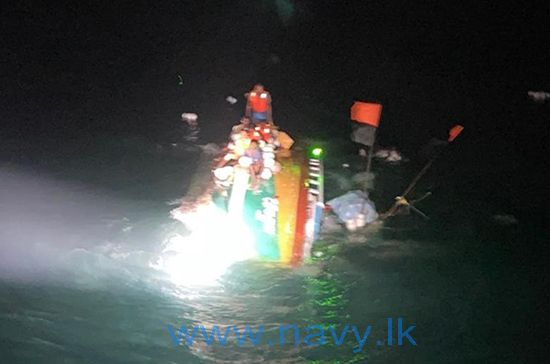 The Navy rescued 06 fishermen from a local multiday fishing trawler in distress about 18.5 nautical miles (34 km) off Dondra in southern waters and bring them ashore morning 19th August 2022.

Reportedly, the multiday fishing trawler ‘Dileesha Putha II’ (Reg. No. IMUL-A-1024 MTR) which left the Kudawella fisheries harbour on a fishing voyage on 16th August 2022, was at risk of sinking having collided with a ship plying in the sea area. Accordingly, the owner of the fishing trawler has reported the incident to the fishing monitoring point of SLCG at Kudawella fisheries harbour. Upon dissemination of the incident to the Maritime Rescue Coordination Centre (MRCC) Colombo at the Navy Headquarters by Sri Lanka Coast Guard, the MRCC Colombo sent a distress signal to the ships in the sea area about the development.

Subsequently, the Fast Attack Craft P 472 of the 4th Fast Attack Flotilla (4 FAF) in the Southern Naval Command was rushed to the sea area where the incident was reported to rescue the 06 fishermen on the distressed fishing trawler. Having located the distressed trawler, the Navy promptly rescued the 06 fishermen from the distressed trawler this morning and rushed them to the Tangalle Base Hospital after bringing them to the Tangalle Fisheries Harbour this morning (19th August).

Meanwhile, the Navy remains on standby to assist naval and fishing communities around the clock in Sri Lanka’ Search and Rescue Region.