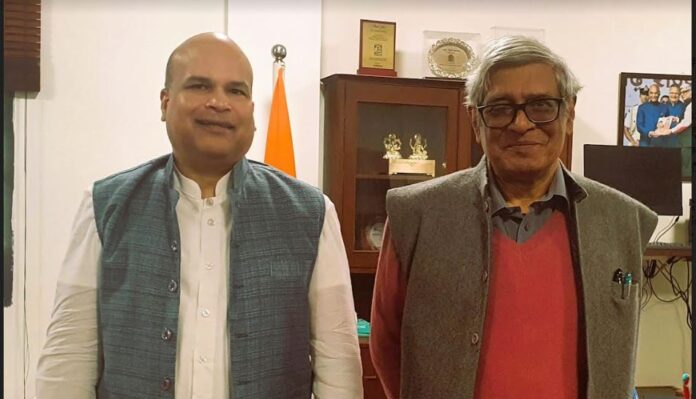 Sri Lanka’s High Commissioner to India Milinda Moragoda met with the Chairman of the Economic Advisory Council to the Prime Minister of India (EAC-PM) Dr. Bibek Debroy at the latter’s office in New Delhi and had an exchange of views.

In response, Chairman Debroy extended an invitation to High Commissioner Moragoda to address the Council on a mutually convenient date on matters pertaining to economic integration and cooperation, which the High Commissioner accepted.

Post Covid supply chain resilience as well as trade and investment were among other issues that were discussed at the meeting.

Dr. Bibek Debroy is an internationally renowned economist and has held many high posts in the government. He is a prolific writer who has translated a number of ancient Indian classics into English, including the Bhagavad Gita. He has also served in the ‘High Level Commission on Legal Empowerment of the Poor’, an independent international organization hosted by the United Nations Development Programme from 2005-2008, of which High Commissioner Moragoda was a member.

Administering Pfizer Vaccines as 3rd dose or booster dose for over...