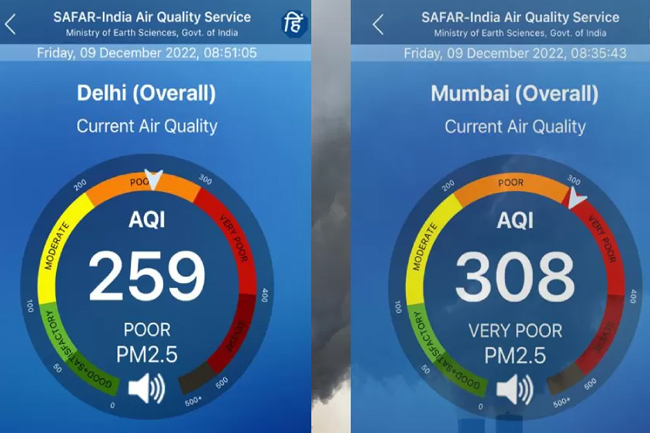 Despite the country’s capital, Delhi, having made headlines recently for having dangerous levels of air pollution, Mumbai, which has a vast coastline and is considered to have better air quality, overtook Delhi pollution levels several times this week.

Mumbai has joined a growing list of Indian cities that have bad air, owing torapid construction, adverse weather conditions and increasing pollution from vehicle emissions as per experts.

The level of PM 2.5 – fine particulate matter that can clog lungs and cause a host of diseases – was 308 in the city on Friday morning at 8.30am [local time], compared to Delhi’s reading of 259, according to government data.

Levels between 200 to 300 are considered poor and any reading between 300 to 400 is categorised as very poor. Many Indian cities, including Delhi, Kolkata, Kanpur and Patna, often report PM 2.5 levels well above the safe limit.

A figure between zero and 50 is considered “good”, and between 51 and 100 is “satisfactory”, according to the the air quality index or AQI.

Meanwhile, it was reported that an influx of particulate matter had contaminated Sri Lanka’s air space as well, through strong winds from India.

Several areas on the island are currently experiencing gusty winds and downpours as the deep depression over the southeast Bay of Bengal has now concentrated into the cyclonic storm “Mandous”.